8 Aug 2016 by Steve Hinton No comment(s)
Facebook
Twitter
Google+
LinkedIn
Pinterest
The thing that I find interesting about Joshua chapter one is that four times in the text the great leader of Israel is told to be strong and courageous. Why would this be such an issue? Because; apparently Joshua wasn’t very courageous at that point in time. The nation of Israel was about to head into the promise land, something they had not done before, and Joshua was charged with leading them. The possibility of fear was real. The danger. The unknown. God’s odd battle plan of marching around Jericho to take the city opposed to a Marine frontal attack. The multitudes of “What ifs.” So I can see that even the greatest of leaders might be scratching their heads with sweaty palms. But God showed up, encouraged Joshua to be strong and courageous, and shortly thereafter the battle was won.

While I don’t know many men today who are required with such tasks from God, I do know fear and men who wrestle with fear.

One of the wounds dealt with at the P1 weekend is that of fear. Sometimes we fear because of what has been done to us in the past or because of simple concern over an impending future on the horizon. For whatever the reason, it seems that as we press into Jesus, while fear may be a real emotion, faith can be a reality and push us forward.

In addition to our work at the initial P1 weekend experience and continued work in a local P2 and P3, how can we move from fear to faith?

To begin with we can stop playing games and just call the situation what it is. Anytime a guy says something along the lines of “I’m not afraid of anything” I know he’s either in denial or arrogant. The truth is that we all experience the emotion of fear from time to time. The problem is not in the initial emotion, but in what we do with it. Fear in and of itself is simply an alarm system telling us that something is wrong. It is when fear is ignored that we move into the position of allowing it to control us. A starting place is to be honest about where we are so that once all the truth is on the table we can deal with it and go forward. If fear is not dealt with, others will suffer as well. No matter how hard we sweep it under the rug, like mold in a dark place, it will continue to grow and consume us until we call it out.

When the emotions are high and the faith is low it’s easy to forget. It’s easy to get into a place where all the promises and provisions of God feel light years away. Those are the times where we need to take stock of what we know and not what we feel. Going back to Joshua chapter one, we see that our hero in the text made it a point to remember the promises made to Moses by God and how God kept His word. A practical application here would be to go through the Bible and simply record the promises of God. Even more helpful would be just taking out a sheet of paper and recalling the times over the past year, or decade, that God has come through when we needed His intervention.

The simple point being that when we remember how big God is, how He has provided in the past and what He’s promised for our future we can regain the strength and trust to push forward in the present.

We cannot stay put. Indeed sometimes being patient and waiting on the Lord is the right course of action. But yet there are other times when not moving on something is actually sin. Not making a decision can sometimes in and of itself be a decision. A bad one.

Secondly, we just have to dive off the cliff and get going. Or like the proverbial Nike commercial; Just Do It! Sometimes we actually know what the right course of action is, but we get bogged down on the “what ifs” that may or may not happen. We know we need to quit a job because the boss is crooked, but we’re afraid about our financial future. We know we need muster up the courage to invite that Christian lady in our office out for a date, but we’re afraid that she might say no. Whatever the issue is, we cannot allow possible negative outcomes to dictate what we do. If we are clear on the right course of action, we need to step forward and let God take care of the future.

Finally, to help clarify the right course of action, we need to trust our brothers. We can seek guidance from more spiritually mature Christ followers and make sure we’re tight in a P3 group and other bands of brothers. Ultimately we need to consider the cost of non-action which will simply leave us in the same place a year from now.

4. Look Toward the Reward.

This one can actually be fun. But instead of anticipating a negative response to our taking the plunge, why not look toward a positive future? God kept His promise to Moses and Joshua and the Walls of Jericho came down. Josh stepped out and was rewarded. Yes it was hard work. But the work of faith paid off. In reprograming our thinking we can begin to see a positive future. By taking steps of faith in our marriage, family, church, business, and lives we can look forward to a positive outcome once we get to the other side of the fear tunnel before us.

We can also look beyond ourselves. Here I’m thinking of the legacy that Joshua left to his children. They saw their father press forward despite his fear and that affected their faith in a positive way. (Joshua 24:15) The reality is that people are watching how we handle fear today. How we handle fear today will influence how others handle fear tomorrow.

In the fear discussion, I’m often reminded of one of my favorite presidents, Theodore Roosevelt, who while giving a speech in Paris in April of 1910, noted that: 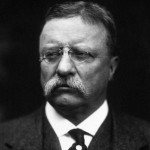 “It is not the critic who counts; not the man who points out how the strong man stumbles, or where the doer of deeds could have done them better. The credit belongs to the man who is actually in the arena, whose face is marred by dust and sweat and blood; who strives valiantly; who errs, who comes short again and again, because there is no effort without error and shortcoming; but who does actually strive to do the deeds; who knows great enthusiasms, the great devotions; who spends himself in a worthy cause; who at the best knows in the end the triumph of high achievement, and who at the worst, if he fails, at least fails while daring greatly, so that his place shall never be with those cold and timid souls who neither know victory nor defeat.”

In that short section, Roosevelt did not describe a man who had no fear, but a man who pressed forward despite fear. For us, we face more than an arena, but a world set before us by the God of all Creation and He has called us to step out and make a difference.

What “Jericho” are you facing today? Call it out, remember your God, and look forward to a great victory.

Who can you also encourage today?

About the Steve Hinton

Steve Hinton serves in the kingdom as a full-time minister in the Houston, Texas area and blogs at kingdomology.com. Steve is married and has four children.